It’s easy to understand why so many organizations are embracing containerized workloads. They offer ease of portability, higher densities per server, lightweight design with less memory demands, plus accelerated app modifications, bug fixing and deployment.

However, with every application involving potentially hundreds of widely dispersed microservices, you need visibility into this burgeoning environment. 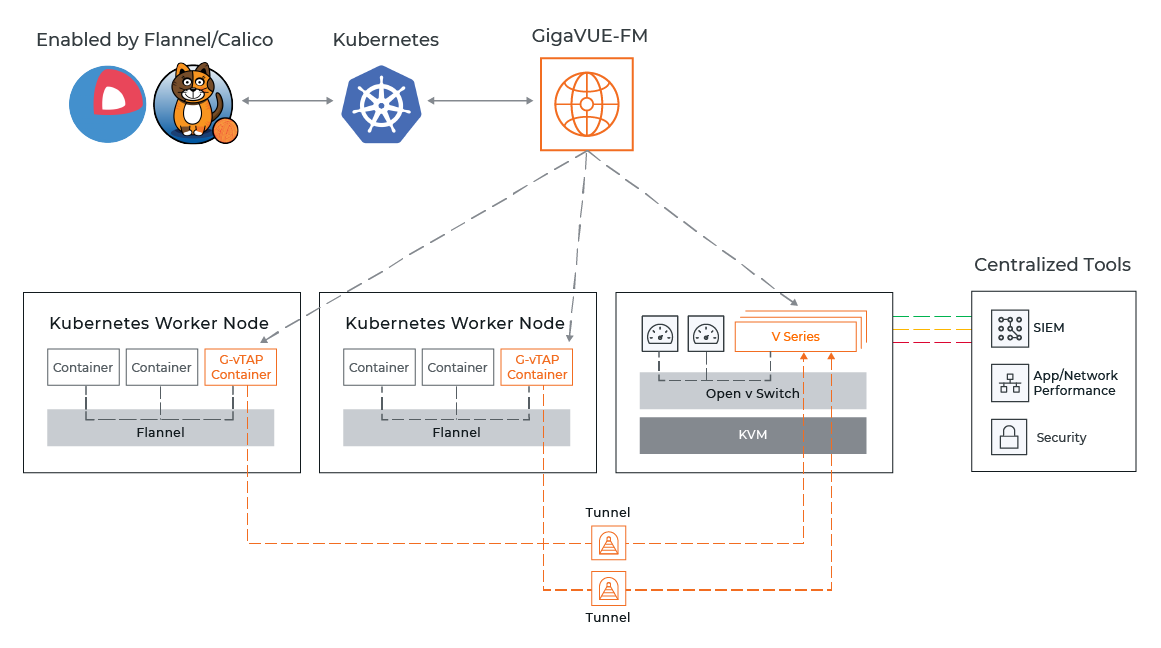 Integration of GigaVUE Cloud Suite for Kubernetes in Docker Environments

Integration of GigaVUE Cloud Suite for Kubernetes in Docker Environments

GigaVUE® Cloud Suite for Kubernetes — a containerized tapping solution for container-based applications that acquires network traffic from all pods in a Docker-based deployment managed by Kubernetes with either Flannel or Calico network overlays — enables security and network monitoring tools to have full visibility into container environments.

You’ll get all this and more:

For Docker containers with Kubernetes, the Kubernetes Controller works with GigaVUE-FM fabric manager via APIs to deploy a lightweight, agentless Docker container (G-vTAP Container) without the need for special software, kernel modules or application redesigns.

These pods reside on monitored servers and selectively mirror traffic based on containerized workloads, leveraging either Flannel or Calico as the network overlay within the worker nodes. They partially process traffic and send to a central aggregation GigaVUE V Series (or GigaVUE HC Series appliance) and subsequently to security and monitoring tools.

With GigaVUE Cloud Suite for Kubernetes, you gain the deep visibility you need to achieve superior security and enhanced performance, while empowering your management team with integrated, certified tool suites. The solution lets you:

If You Don’t Have Container Visibility, Your Org Is at Risk

Peering into containers is critical to avoiding blind spots; explore how to bring visibility into microservices-based apps.

A Three-Part Guide for Cloud Migrations

Learn from a common set of cloud adoption patterns to make sense of your journey.

Extend your security to the public cloud by ensuring relevant traffic distributed.

Aggregate, optimize and selectively distribute traffic to your tools.